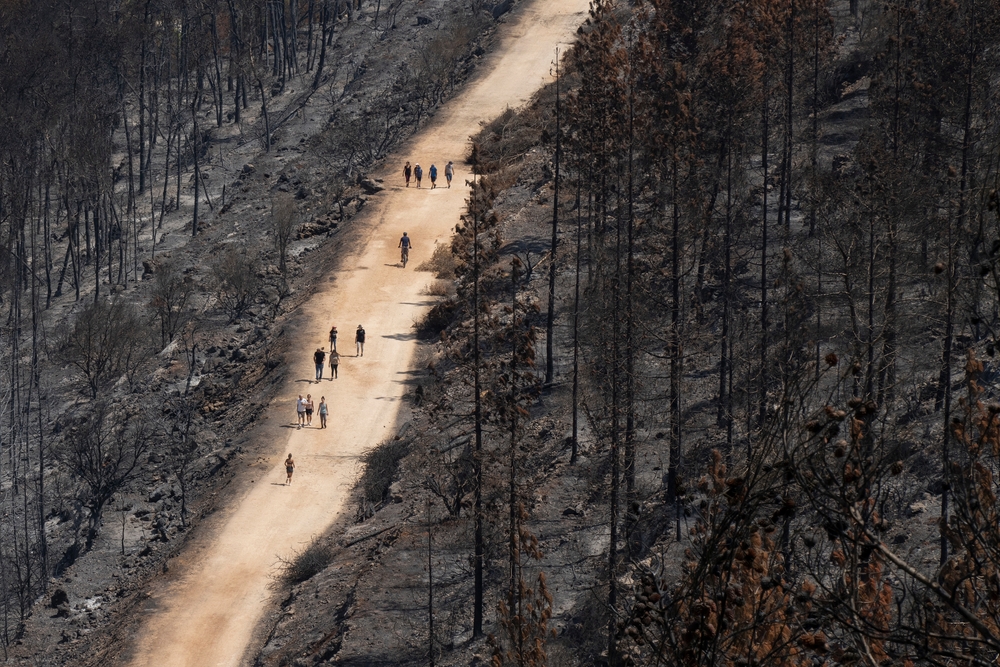 Mike Villarreal had to leave work early this week because his eyes felt so dry it seemed they would fall from his head.

“It’s the feeling of having a head cold that’s concentrated in the back of your eyes,” said the Southtown resident who often walks or bikes along the San Antonio River. The founder and director of UTSA’s Urban Education Institute said he can usually power through to have a productive day, but lately “it’s just been difficult.”

Such struggles are common during allergy season, but this year could be worse for many sufferers. The pollen, dust, dirt, soot and smoke populating San Antonio’s air in recent days are conspiring to cause more grief than usual.

The pollen and pollution can be seen with the naked eye as a layer of yellow dust and muck on car hoods. The deluge moved San Antonio from “good” air quality to “moderate” on the IQAir real-time air quality index earlier this week. As of Thursday, it had returned to “good.”

Recent area wildfires have contributed to the situation. “Lots of patients are feeling miserable,” said Mark Stahl, a board certified allergist with Apex Allergy and Asthma in San Antonio. “On the North Side, that Medina [County] fire was affecting us in Helotes and into Boerne.”

Araceli Elizalde, an allergy and immunology specialist at Allergy & Asthma Texas Health, said the increased carbon dioxide caused by fires results in a “stress reaction” from trees, causing more pollen to be released, which can further aggravate allergies. High ozone levels have the same effect. In addition, people are not wearing masks for the first time in many months, which increases their exposure to pollen.

Stahl said the late spring and recent freezes have created a synergistic effect, which results in multiple allergens being released simultaneously.

Oak, hackberry and willow trees are all ranking on the American Academy of Allergies, Asthma and Immunology’s pollen tracking website this week. On local pollen count websites, if no single allergen ranks highly, that could be because several are present. As many as seven allergens can be present in low amounts at the same time, said Stahl, and so still impact people’s allergies.

So much pollen is airborne that even people who are not allergic are feeling the effects, he said.

Just within the past couple of days, Elizalde said she’s had many more patients complain of eye symptoms, including rashes on the eyelid. Typically these reactions do not respond to over-the-counter eye drops and require prescriptions and creams for the rashes.

Many people who have moved here from out of state are also getting past their “honeymoon period,” the year or two after someone first arrives in a new location and escapes allergic reactions. Now, the allergic reactions are setting in, she said.

A lack of rain makes the situation worse. Typically, rain washes allergens and dust from surfaces and helps purge it from trees and plants. Damp pollen doesn’t hitchhike with the high winds like dry pollen does. And with much of Texas in a drought, pollen granules linger longer.

In March, the Asthma and Allergy Foundation of America (AAFA) ranked San Antonio the fifth most challenging city in the country for living with allergies for 2022. Last year, San Antonio ranked 14th.

Jaffee said the polar vortex that hit the South Central region of the U.S., and particularly Texas, in early 2021 caused the spring allergy season to not only start at a later date, but last longer. In addition, on top of the normal ragweed season in the fall, some estimates suggest “cedar fever” can start as early as November, which may impact the fall scores.

“The allergy season will be longer and more intense,” said Stahl, adding that oak season is here in force and should last several more weeks.

Beyond the usual antihistamines, Elizalde recommends checking pollen counts daily and planning outdoor activities accordingly, keeping windows closed and making sure AC ducts are clean. She also recommends wearing sunglasses, a mask and hat when outdoors and rinsing off with a shower after spending time outside.

Villarreal said the high pollen counts won’t keep him from his daily jaunts along the San Antonio River. “The reason I go outside even though it exposes me to more pollen is that it helps clear my mind. Looking at trees and wildlife is a real comfort to the soul.”